Since 1977, Professor Kenneth W. Stein has taught Middle Eastern history, political science and Israel studies at Emory University, where he holds a joint appointment in the History and Political Science Departments.  Author, writer, teacher, and lecturer, he was at the center of developing sustained institutions at Emory, namely the International Study Center (1979), the Middle East Research Program (1992), and the Institute for the Study of Modern Israel (1998). Stein's scholarship focuses on the origins of modern Israel,  Arab-Jewish-British politics during the British Mandate in Palestine, the Arab-Israeli negotiating process, American foreign policy toward the Middle East, and the modern Arab world. Primarily, he concentrates on undergraduate teaching in courses on American foreign policy toward the Middle East, the modern Arab world, Arab-Israeli conflict, and modern Israel. His undergraduate course, "History, Politics and Diplomacy of the Arab Israeli Conflict," is one of Emory's most popular courses.  In spring 2006, he was a Visiting Professor of Political Science at Brown University. 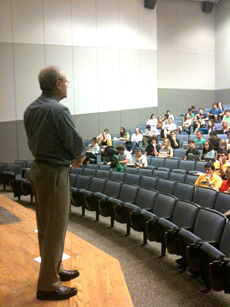 His most recent book is the highly acclaimed source/documents collection of 452 items in History Politics and Diplomacy of the Arab-Israeli Conflict A Source Document Reader for College Courses and Adult Education (June 2015),http://israeled.org/history-politics-diplomacy-arab-israeli-conflict/  His other books include Mediniut Amitza [Courageous Policy] (Tel Aviv: Ministry of Defense Publishing House, 2003); Heroic Diplomacy: Sadat, Kissinger, Carter, Begin, and the Quest for Arab-Israeli Peace (New York: Routledge, 1999); Making Peace Among Arabs and Israelis: Lessons from Fifty Years of Negotiating Experience (Washington: United States Institute for Peace, 1991); and The Land Question in Palestine, 1917-1939 (Chapel Hill: University of North Carolina Press, 1984, 1985, and 2003). From 1996 through 1999, he wrote the chapter on the "Arab-Israeli Peace Process" in the Middle East Contemporary Survey (Westview Press). For the 1999 and 2002 editions of the Microsoft Encarta Encyclopedia, he wrote the entries for "PLO," "1948 Israeli Independence War," "June 1967 War," "1973 October War," "Hamas," and "Intifadah."

At Emory, he was at the center of developing sustained institutions for the University.  He founded and established the International Studies Center (1979) which has evolved into the present Emory Center for International Programs Abroad (CIPA).  In the 1980s, his fundraising contributed in a small way to the evolution of Emory College’s area studies program through securing federal funds for partial salary payment for newly appointed faculty.  Under Stein’s initiative, the College established the Middle East Research Program-MERP (1992) and the Emory Institute for the Study of Modern Israel-ISMI (1998), where he remains the founding director. ISMI was the first such permanent Center or Institute for the Study of Modern Israel in the United States. Through his fundraising external to the university, Stein has brought 12 visiting Israeli scholars to the College who taught 20 courses in 8 disciplines and reached some 650 students, meeting a growing demand by Emory undergraduates for more quality courses on Israel.  ISMI hosts semester and summer internship programs , among the most sought after in the college. http://ismi.emory.edu/home/internships/index.html

Since 2007, he has engaged in writing secondary school curriculum on Israel and the Middle East through the Atlanta-based Center for Israel Education, a non-profit he established to focus on teacher/student education and curriculum development on modern Israel and the Middle East, through conducting workshops, symposia, and long distance learning. By summer 2016, more than 2100 middle school and secondary school teachers have participated in workshops which he directed and participated actively. Published by the Center for Israel Education, he has written or co-authored seven curriculum/teaching units on aspects of modern Israeli history, society and politics: A Sephardi Jewish History (2014); Israel @ 65: A Family and Community Resource (2013); Israel and the Jewish Nation: Part One (2012); Israel and Hebrew Language: A Nation's Choice (2010); Israel's National Security and Civil Liberties: Balancing the State's Objectives (2009); A Call to Action: Volunteering and Israel's State-Building (2008); and To Israel and Back: A Journey to Our Future (2008)http://www.israeled.org/israel-education-store.

Stein is a frequent commentator for the media, civic, and national Jewish organizations.  In 2012, he was the recipient of the Jewish National Fund's prestigious Etz Chaim Award for Service. In 2011, Emory College created the Kenneth W. Stein Fund for the Study of Modern Israel, http://ismi.emory.edu/home/about/stein/endowed/professorship, to preserve in perpetuity his 35 years of scholarship and service which established the growth of modern Israel studies on the Emory Campus. The professorship is being partially supported by many of his former students and their parents. In 2009, he was awarded the Cuttino Medal for Lifelong Mentorship to Emory undergraduates. In 2008, the Atlanta Jewish community honored him for his thirty years of service as a public intellectual with the Tree of Life Award. In 2001, he received the Marion V. Creekmore Award for his quarter-century commitment to the internationalization of Emory College's curriculum.  In 1995, Emory awarded him the Williams Award for Excellence in Undergraduate Teaching.

Dr. Stein earned his undergraduate BA degree from Franklin and Marshall College (1968), and two Masters (1969 and 1971) and his doctoral degree (1976) from The University of Michigan. His doctoral work focused on the social-economic background of the Jewish-Arab conflict in British Mandatory Palestine.  From 1971-1973, he was a visiting graduate student at The Hebrew University of Jerusalem, and from 1974-1976 he wrote secondary school social studies material on the Middle East while teaching several courses at The University of Michigan.